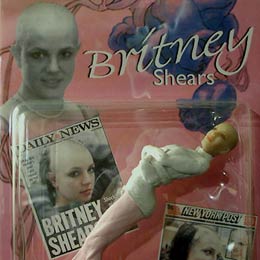 The Britney Shears new doll is "not for kids" as the package claims, probably because it could give many of them the wrong ideas. Photo by eBay
Britney Spears has hit rock bottom as of late with a suicide attempt and a Sinead o'Connor act in her recent history, but entrepreneurs in the US have decided to dig her even deeper.

With the first Britney Rehab Doll now on the market, Spears has little to look for when she goes out of the Promises rehab centre.

The Britney Shears figurine comes in a straightjacket, baldhead and all. Manufacturers have shown some mercy on the singer, however, for they have at least considerably slimmed down the doll's figure.

The doll currently sells on eBay for USD 82.