Little Vienna Under the Bridge 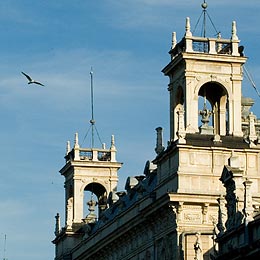 Rousse's architecture inspires locals to call it the "Little Vienna". Photo by Kameliya Atanasova (Sofia Photo Agency)
When Bulgaria was preparing to pop the champagne in the very last seconds of its existence as a non-EU country, many chose to celebrate in an unusual way, going to the Danube Bridge and being the first to cross a now obsolete border. Now, a month and a half later, Bulgaria's city of Rousse, has become a preferred destination for dozens of Romanians. But it is the Danube city's history, architecture and people that make it worth visiting.

Although it is the birthplace of Nobel Prize laureate Elias Canetti and world chess king Vesselin Topalov, the city is most famous for the fact that it stands on one end of the Danube Bridge. But many Bulgarians also know it as the "little Vienna" - a name earned by its downtown architecture. The city's main square "Liberty" and the surrounding neighbourhoods are all inspired by the Viennese architecture and with its Christmas bazaar, it really reminds of the Austrian capital. Those into trivia may be amused to know that locals jokingly call the square "Heatstroke Square" because it is so big that crossing it in the heat of summer is a challenge.

Rousse's history is rich as its place on the Danube made it one of the key players in the rebellion against the Ottoman empire. An emblematic figure of that time is Tonka Obretenova, whose monument still rises at the bank of the river. Born in 1812, Baba Tonka, as history remembers her, was the heart of the biggest revolutionary committee in the country. All her four sons - Anguel, Petar, Nikola and Georgi were either killed fighting the Turks or exiled. Her monument at the doorstep of her house that has been turned into a museum shows her waiting for her sons who never returned home.

The city has pioneered in many areas - it was the home of the first Bulgarian railway (1866), bookstore (1867), professional teachers' union (1871) and movie screening (1897). It is still one of the largest educational centres in the Balkan country. There are a total of 49 educational establishments there, the most prominent of which are the Rousse University, the Teacher`s College, the Arts College and the three UNESCO schools.

Today Rousse is an interesting mix of crumbling apartment blocks on the outskirts and astounding architecture in the centre. Its park by the Danube has been preserved from urbanization and offers a nice place those who love peace, quiet and...mosquitoes. The city still bears the scars from the devastating Vrancea earthquake in March of 1977 and some blocks are leaning, quite like the tower in Pisa. Clothing and furniture factories are scattered in the area and the majority of their goods are for export only.