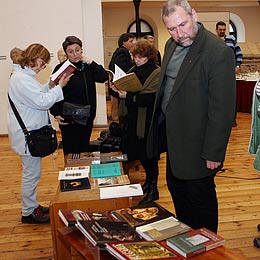 NAM's director, professor Vassil Nikolov is one of the authors. The scientific researches of archaeologists Georgi Kitov, Nikolay Ovcharov and Diana Gergova were among the presented books.

The books exhibited show the different faces of the culture in the Bulgarian lands from prehistory to the Middle Ages, interesting archaeological facts and evidence in the area of numismatics, literature, architecture, art and epigraphy.