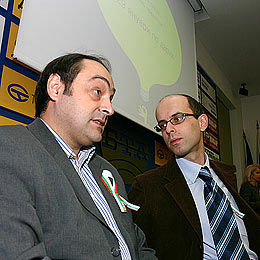 Lyudmil Karzhilov, Managing Director of DarikWeb, Inc. (L) and Konstantin Vulkov, the new Program Director of Darik radio, presented their plans for 2007. Photo by Kameliya Atanasova (Sofia Photo Agency)
Bulgaria's Darik Radio will have a special festive programme and many surprises for its audience on January 22 when the popular media celebrates its 14th birthday.

The celebrations will go under the motto "The difference is in the radio", and the audience will be treated to special surprises.

The radio also presented on Wednesday its new programme schedule for 2007 promising that the changes will make it easier to adjust to Bulgaria's new reality in the EU.

Starting January 29, Gong sports radio will receive a bigger outlet with extra hours added to its schedule, much to the pleasure of sports fans. On that date Darik will also add two new web sites to its on-line family, one dedicated to the radio and the other to sports news.

Both Novinite.com and Darik News are leading online media, have a long history behind them and thousands of committed readers.

After the merger they offer real time news pieces in Bulgarian and English on similar topics.