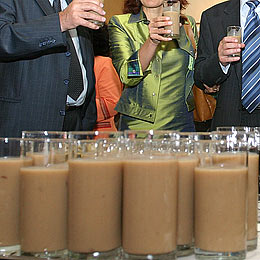 Boza is a popular drink in Bulgaria, even among the MPs, who had a boza-flavoured breakfast in Parliament. Photo by Yuliana Nikolova (Sofia Photo Agency)
European men are flocking to Bulgaria to buy "breast-boosting" beverage after EU accession led to customs duties on the drink being abolished.

The drink called Boza, made from fermented wheat flour and yeast, is being snapped up by bar owners, shopkeepers and shoppers from across Europe.

They are said to be keen for their wives and girlfriends to benefit from its reported ability to make women's breasts grow.

Ananova news agency quoted Austrian landlord Klaus Schmidt from the ski resort of Schladming as saying he was planning a trip soon to the EU newcomer.

"I had heard of Boza before but it was always so expensive once the tax was added. But now that's gone I'm going to start offering the drink to my aprГЁs-ski customers," he has said.