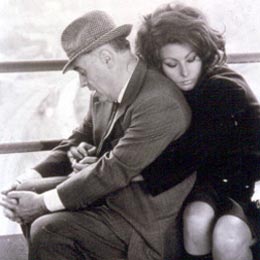 Carlo Ponti married Loren in 1957 when she was just 22 but the marriage was later annulled. They remarried in 1966. Photo by RAI
Italian movie star Sophia Loren has lost her husband Carlo Ponti who died on Wednesday, ANSA news agency said.

Ponti was admitted to hospital about 10 days ago for pulmonary complications, the family said in a statement. He died overnight at the age of 94 in a hospital in Geneve, Switzerland.

Sophia Loren has been happily married to Carlo Ponti, who is film producer, for almost five decades. They have two sons, Carlo Junior and Edoardo.

His greatest successes in movies came after the Second World War, when he did not hesitate to experiment and introduce new methods into the cinema.

Carlo Ponti married Loren in 1957 when she was just 22 but the marriage was later annulled. They remarried in 1966.

The producer spotted Loren when she took part in a beauty contest when she was just 15 and he was a 37-year-old judge.

Ponti groomed her for stardom, arranging for her to study acting and take English lessons. He changed her name from Sophia Lazzaro and secured her roles in a number of low-budget Italian films.

Their careers blossomed simultaneously. In 1962 she won the best actress Oscar for Two Women (La Ciociara), produced by Ponti. Four years on he was nominated for an Oscar for Doctor Zhivago.

Ponti's other well-known films included The Cassandra Crossing, The Verdict and The Squeeze.