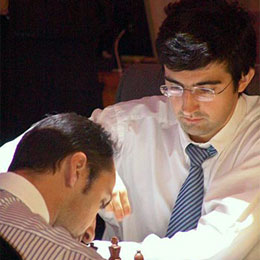 Vladimir Kramnik of Russia has won the title of world's best chess grandmaster defeating Vesselin Topalov of Bulgaria in an overheated four-game tiebreak game on Friday. Photo by ChessBase.com
By Ivelina Puhaleva

The last two years have probably been the strangest, yet most rewarding in the career of Chess Grandmaster Vesselin Topalov.

Despite his defeat by Vladimir Kramnik, Bulgaria's Vesseling Topalov is still the chess master of the world, the latest FIDE rankings show. The chess federation published its ratings for January of 2007, and Topalov still holds the highest number of points (2783), although his loss cost him 30 points.

In 2005 he started by a third place in Courus and a disappointing performance in Dortmund. And he finished by taking the World Champion title in San Luis, Argentina by the amazing 1,5 points advantage. Adding to this the joint first place in Linares 2005 (where he defeated Kasparov in his last oficial game) and a victory in Mtel Masters 2006 he soon became top of the list with over 2800 rating.

The weirdest part in the latest events, however, came from Elista, Russia, where the world watched a one-month tense game - the unification match between Russia's Vladimir Kramnik and Bulgaria's Veselin Topalov. Surprisingly, it was not the chess skills that focused the limelight but ... the toilets.

From the outset of their match in Elista Vladimir Kramnik and Veselin Topalov had very little in common. The first domineering in Classical Chess and the second considered to be brilliant strategist. After a dramatic start of the World Championship the play on the board has given way to heavy psychological warfare.

The thrilling first two games were almost forgotten when the fighters stopped exchanging powerful crosses and uppercuts. Kramnik led after four rounds, however, his opponent was not shaken. Topalov recovered from starting disappointment, and showed his teeth in a hard positional struggle. Just as Kramnik proved his capability to survive a tactical storm, the Bulgarian showed that he can fight on Kramnik's territory of subtle maneuvering against positional weaknesses.

It was evident Kramnik was determined to bury his opponent in the game three. Topalov's impatience, displayed in those games, overcast his imagination and tactical brilliance. He stuck to a strategy starting all the games with a Slav to have advantage in the opening - and to create serious problems for Kramnik in the beginning of the games.
The first draw of the match certainly brought mixed feelings to the players.

Move by move, the Classical Champion Vladimir Kramnik kept sucking energy from White's pieces, and slowly made everybody including Topalov believe that the draw is unavoidable. Vladimir even said at a press conference that this was easy and obvious draw at any time, and he wasn't even concentrating, thinking about forthcoming football matches. This was strong bluff!

The Bulgarians retaliated on the next day. Manager Silvio Danailov wrote two complaints to the Appeals Committee, stressing that Kramnik uses toilet in his restroom too often (he claimed 50 times during the third game). The FIDE champion's manager suspected violation of the fair play and threatened to withdraw from the match. Kramnik's team, in turn, threatened to withdraw their man, who is willing to use his human and player's rights.

The Bulgarian team made a public statement that Kramnik used to visit his private bathroom (the only place without any audio or video surveillance) unreasonably often and made the most significant decisions in the game in the bathroom. They also demanded that the organizers of the tournament make available to journalists the surveillance video from Kramnik's room for games 1 through 4.

The organizers made parts of the video available, explaining that other parts of it were missing due to technical issues. Danailov demanded to stop the use of private restrooms and bathrooms, and threatened to reconsider Topalov's participation in the match.

The decision of the Appeals Committee that the private WCs would be closed and a common toilet opened for both players only stirred indignation from the team of Kramnik, who refused to go on playing under revised conditions.

Kramnik refused to play game 5 and was forfeited. In a couple of days pause the restroom issue was resolved in Kramnik's favour and the Appeals Committee was replaced. Finally, the twelve-game match was drawn at 6-6 and Kramnik won the tie-break 2.5-1.5 to unify the titles and dethrone Topalov.

After the game Topalov said he did not think this issue was closed. "I do not want to take part of it. This is the job of my manager and I do not know all the details. Of course, that was something very strange that the team Kramnik could not explain."

Upon their return to homeland Veselin Topalov and his manager Silvio Danailov announced that there would be a book exposing Toiletgate. "We were under a lot of pressure, the hosts made everything to win the title," Silvio Danailov said in Sofia. "Expect a whole book on the events in Elista where the scandal with the toilet will be explained in details."

Yes, any follow-up of this highly controversial story is worth - not for the sake of rivaling champions, but for the world of chess lovers.