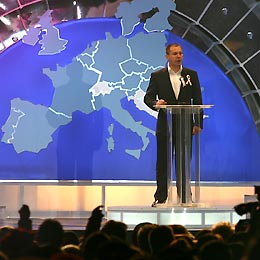 PM Sergey Stanishev addressed crowds of celebrating Bulgarians on the night of stepping into the European Union. He appeared on stage, in front of a symbolic EU map. Photo by Kameliya Atanasova (Sofia Photo Agency)
In an emotional address to the nation minutes before midnight, Bulgarian President Georgi Parvanov called the country's EU entry a "heavenly moment".

"The day we are welcoming - January 1, 2007 - will undoubtedly find its place among the most important dates in our national history," Parvanov said in a televised address to the nation.

"But let's make it clear - our future success as a nation depends not on European funds and resources, but on our own work," he emphasized.

"We cross a frontier, a historical watershed. The coming day Jan. 1, 2007, no doubt, will be among the most significant dates in our national history," President Georgi Parvanov said.

He also remembered the five Bulgarian nurses, sentenced to death in Libya on charges of causing an AIDS outbreak at children's hospital in the city of Benghazi.

The same point was mentioned by Prime Minister Sergey Stanishev, who was determined that "we shall not give up working for their return home".

PM Sergey Stanishev addressed crowds of celebrating Bulgarians on the night of stepping into the European Union. He appeared on stage, in front of a symbolic EU map.

Tens of thousands of people crowded the streets of the capital Sofia and the main cities to celebrate the EU membership and the New Year amongst spectacular fireworks and open-air rock concerts.

Many people wore bands with the white, green and red national colors on their clothes reading "You are not alone!" - a sign of solidarity with the five imprisoned nurses.