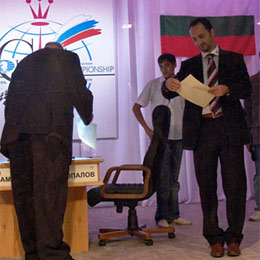 The match's referee Geurt Gijssen argued the delay decision with a clause from the competition rules.

The real cause, however, follows the non-appearance of Kramnik on Friday to play Bulgaria's grandmaster Topalov claiming he was insulted by the referees' bar to use private toilets.

The contest of the two grandmasters fighting for the world chess championship title in southern Russia was plunged into scandal over the frequency of one player's restroom breaks.

Bulgarian grandmaster Vesselin Topalov, who has yet to win a match after four attempts against Viktor Kramnik of Russia, threatened to quit the tournament entirely if organisers did not enact better controls on toilet breaks.

Topalov's manager, Silvio Danailov, complained in a letter that Kramnik had used his private restroom far too frequently during the first four games of the tournament, insinuating that the Russian champion was cheating in the toilet, the only area not under video surveillance during play.

On Friday, at 4:22 pm, one hour after he had started the clocks, Chief Arbiter Geurt Gijssen stopped the game and awarded the point to Veselin Topalov. The official announcement that Kramnik had forfeited the game was made just before 5:00 pm local time.

"I am ready to continue the match and play the 5th game tomorrow on the conditions that were accepted prior to the start of the match," Kramnik said in the meantime at a special press conference. "My dignity does not allow me to stand this situation," he added and left almost immediately.

The break-up made FIDE President Kirsan Ilyumzhinov to take a late flight and arrive from Sochi to Elista.

He is to negotiate with the two teams on ways to save the unique contest, which pursued the unification of the world chess title.