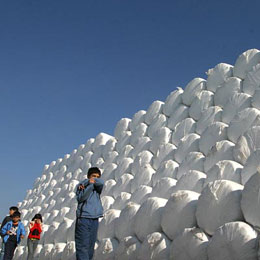 Unofficial estimates show nearly 300 000 tons of baled garbage have been stored at the temporary dumps near Sofia. Photo by Yuliana Nikolova (Sofia News Agency)
A Sofia deputy mayor has declared the capital to be in a state of ecological crisis as efforts to find a suitable nearby garbage dump failed again.

"The only legal way out of the crisis is to open the depot at Suhodol," Milor Mihaylov told Darik News a day after its citizens said "no" to the offer to get compensations in return for a garbage processing plant.

By the end of the week ten experts will be invited to make an assessment of the risks of reopening the old depot, Mihaylov said.

He announced the municipality is exploring a new site for the construction of a garbage plant some 20 kilometres off Sofia, but refused to disclose its exact location.

The Bulgarian capital has been brought to the brink of an ecological crisis several times after protests closed the Suhodol dump last summer.