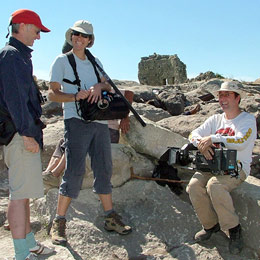 A team of Discovery Channel is filming the latest findings at Perperikon - a massive fortification wall. Archeologists are thrilled they might be digging out Thracians' fabulous city of Pergamon. Photo by BTA
A team of Discovery Channel has commenced filming the royal palace at Perperikon - ancient sanctuary believed to be more respected than Delphi Oracle.

The world-popular travel channel has sent its team for the first time in Bulgaria, intrigued by the yet not completely known world of ancient Thracians.

The team including a producer and a photographer is to tour all the sites related to the history and culture of Thracian tribes.

Besides Perperikon, located in the bosom of the Rhodopes mountain, Discovery's audience will see also Tatul, where the tomb of Orpheus is believed to be, and the Valley of Thracian Kings locating some of the most fabulous Thracian treasures.

"The world knows a lot about ancient Greeks and Romans, but few of achievements made by the Thracian civilisation have been displayed," a team member told state-run BTA news agency.

Discovery Channel will shoot a one-hour documentary dedicated to this little known page of history and will feature it first in the UK and the US.

Summer 2006 has marked even more enhanced archaeological work at Perperikon's excavations, near Kardzhali. In July they hit an amazing streak at the site unearthing a temple five times larger than Athens' Acropolis.

The team's leader Prof Nikolay Ovcharov has even voiced his belief Perperikon may even turn out to be the ancient world's famous Thracian city of Pergamon.