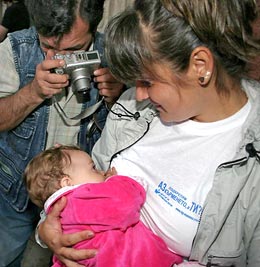 Bulgarian mothers had their term of maternity leave prolonged to 315 days. Photo by Yuliana Nikolova (Sofia News Agency)
Bulgaria has been pronounced the best place to have a baby by the French magazine Le Nouvel Observateur.

The country recently took measures to fight a low birth-rate: the term of maternity leave has been prolonged to 315 days during which the mother receives 90 % of her salary. There is also the possibility the maternity leave to be followed by a paid leave to raise the child until it reaches the age of twelve months. In addition, social security aids are granted for a period of two years if the mother decides to stay home to raise her child.

The author Veronique Radier points out that a principle European legislation obliges all European member states to implement maternity leave of at least 14 weeks.

"But some countries, such as Spain, do not always make the difference between maternity leave and paid leave. France is in the average levels with a 16-weeks leave. On the other hand, however, it is one of the few countries that also have a paternity leave."

Sweden and Norway are lining behind Bulgaria with a one-year leave paid at 80 % of the salary or 10 months at 100 % for the mother and one month in the case of a paternity leave.

Germany, which is also hit by a low birth rate, just introduced a "parental salary" which amounts to 2/3 of the net salary and which can be received during the period of 14 months under the condition that the father gets a part of it.

In the USA, where the maternity leave has become compulsory only a few years ago, and only in companies with more than 50 employees, this leave is, in general, not remunerated.