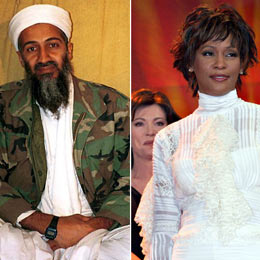 Osama admired Whitney Houston and believed she was ???truly Islamic,??? an ex-lover of the terrorist claims. Photo by Daily Mail
Osama bin Laden is obsessed with pop diva Whitney Houston, and has even considered killing her husband Bobby Brown, Sudanese poet and novelist Kola Boof has claimed.

Boof, 37, says she herself was bin Laden's sex slave for four months 10 years ago.

"He said that he had a paramount desire for Whitney Houston, and although he claimed music was evil he spoke of someday spending vast amounts of money to go to America and try to arrange a meeting with the superstar, " the writer has said in her autobiography, "Diary of a Lost Girl", excerpted in the magazine Harpers' Bazaar.

"How beautiful she was, what a nice smile she has, how truly Islamic she is but is just brainwashed by American culture and by her husband Bobby Brown, whom Osama talked about having killed, as if it were normal to have women's husbands killed," Boof has revealed, as cited by world media.