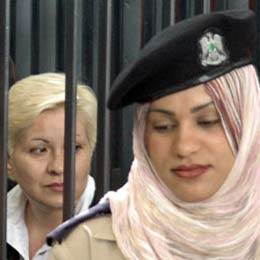 The five Bulgarian nurses have already spent several years in Libyan jail, and say they have been tortured to give false confessions. Photo by Middle East Online
Four Libyan experts confirmed Tuesday their testimonies against the Bulgarian nurses, who stand trial for deliberately infecting with AIDS over 400 kids in a Benghazi children's hospital.

For nearly two hours the Libyan experts tried to convince the Tripoli Criminal Court that the HIV epidemic outbreak was deliberately started by Bulgaria's nurses, just as their report from 2003 stated, BTA correspondent reported.

They called the outbreak a "strange incident," which could not be a result of the repeated use of non-sterile syringes.

Their 61-page report was submitted as evidence in the previous trial, which ended with the six convicted of intentionally infecting 426 Libyan children with AIDS virus when they worked in a Benghazi hospital.

"This report is real and we are honest in reporting from the files which are available in the hospital and according to the cases which we interviewed," one of the five, Othman Shabani, a medical doctor, said as quoted by CNN.

In addition, the sixth hearing of the court presented the so-called "lighter charges" that were raised against the Bulgarians only - drinking and distilling alcohol in public places and illegally transacting in foreign currency.

The court will convene again on August 29 to question another two witnesses for the prosecution, as well as hear the pleadings of the parties.

The five Bulgarian nurses have already spent seven years in Libyan jail, and say they have been tortured to extract false confessions. After they were once found guilty and sentenced to death by a firing squad, a higher court ordered a retrial.

However at an earlier hearing, Court President Mahmoud Haouissa had declined to allow international HIV/AIDS experts to testify in defense of the accused.

Tripoli has suggested the nurses could be released if Bulgaria pays compensation to the disease-stricken children and their families, who have demanded USD 5.5 B. Bulgaria has refused to pay, but has joined the United States, the EU and Libya in agreeing to back the creation of an aid fund.