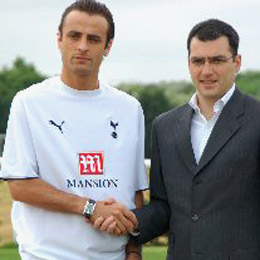 The London football club announced that they reached a deal with Berbatov's previous squad, Bayer Leverkusen, and that personal terms with the player have also been agreed.

"There were a number of clubs interested in signing Dimitar, clubs from France, Spain and the Premiership. We are delighted he has chosen to join us," Tottenham's sporting director said.

Damien Comolli praised the new recruit as being a skilful and highly-talented striker.

"Tottenham is a club that is building something special. The squad has some terrific young players, an excellent manager and coaching staff and I am looking forward to playing my part," Berbatov commented.

The 25-year-old scored 21 goals in 34 matches for Bayer in the Bundesliga last season - the second highest goalscorer in the league.