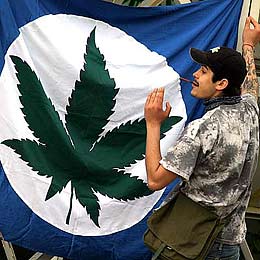 The Million Marijuana March (MMM) held Sunday in Sofia called for legalization of the drug. Photo by Yuliana Nikolova (Sofia News Agency)
A peaceful promenade expressing disagreement with the ban of marijuana usage marched through the streets of Sofia on Sunday.

The initiative's organizers in fact followed the example of the movement "Cures Not Wares" strolling around the globe for seven years now.

The Million Marijuana March (MMM) in its Bulgarian mode also gave out leaflets explaining the damages of other types of addictions compared to that of marijuana and ended with a debate in the popular discussion Red House.

Two years ago the Bulgarian law was amended in the way to allow the so-called single dose, but many believe that this is not enough.