Sofia Beefs up Security, Closes Streets ahead of NATO Forum 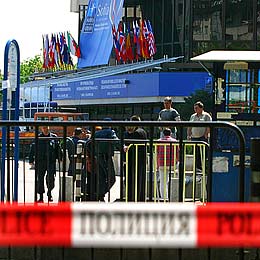 Starting from April 25 till April 28, including, vehicles are prohibited to enter sections of Vitosha and Brussels, Tsar Osvoboditel and Levski boulevards, as well as Fridtjof Nansen street. On Tuesday the restrictions caused huge traffic jams and many people were grumped about getting late to work.

A total of 3,000 Bulgarian police officers will be mobilized during the official visit of US Secretary of State Condoleeza Rice to Sofia on April 27.

Foreign Ministers from the 26 NATO countries will hold informal consultations in Sofia, Bulgaria, 27-28 April, to discuss the political agenda for the upcoming NATO Summit in Riga, Latvia, this November.

Ministers are expected to discuss proposals for a more structured relationship between NATO and certain countries beyond the Euro-Atlantic area. Ministers will also discuss the possibility of a training initiative for interested partners in the Middle East, to help develop their capability to do modern peacekeeping operations.

The situation in the Balkans, including the Kosovo status talks and the progress made by countries aspiring to NATO membership, will also be discussed.