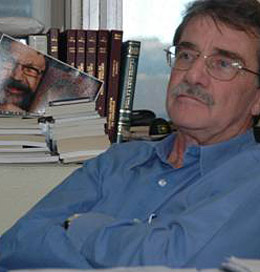 The 74-year-old Petkoff, former Venezuelan Planning Minister, became the fourth opposition candidate to say he will challenge President Hugo Chavez in December's election. He briefly explained his reasons and asked Venezuelans to follow his lead in the construction of a new, better Venezuela.

Petkoff, who is now editor of opposition newspaper Tal Cual, made his announcement during a television broadcast. The Tal Cual has been a furious critic of both the chavism and the pro-coup sector of the opposition.

The center-left opposition leader was a Cuban-inspired guerrilla in the 1950s and 60s, but later split with the Communist Party. Today, he is one of Chavez's fiercest critics.

Petkoff was a member of the Movement towards Socialism (MAS), but left the movement because he was against the MAS support of Hugo Chavez' candidature.

He was congressmen and presidential candidate twice.

Chavez, and three other opposition leaders, Julio Borges of the First Justice Party, Roberto Smith of the Venezuela First Party, and William Ojeda of the Only One People's Party, have already announced their candidacies.

Venezuelans go to the polls on December 3.