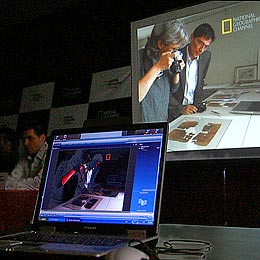 At a press conference in Sofia held about the time when the discovery was presented in Washington, National Geographic representatives showed stills of the manuscript. Photo by Yuliana Nikolova (Sofia News Agency)
An ancient manuscript containing the long lost Gospel of Judas was presented by National Geographic in Bulgaria on Thursday, the same day it was brought to light in Washington.

Dated at III-IVth century AD, the manuscript has been authenticated as the sole surviving copy of the Gospel by Christ's unfaithful disciple.

The precious document is about to shed new light upon Judas' whole image, National Geographic promised. According to the Gospel, Judas was Christ's most beloved student, and the only one who knew of Jesus' real plan. By betraying Christ for 30 silver pieces, the disciple actually helps him on his way to divinity. By sacrificing his "human shell", Judas helped Jesus to find relief from his material body and light up his divine spark, the Gospel states.

Lost for 1700 years the ancient manuscript has traveled a long way before it reaches the public of today. It was found in an Egyptian desert in the end of the 1970s and passed through a string of antique dealers before ending up in the hands of Rodolphe Kasser, a Swiss scholar of Coptic studies.

13 double-sided papyrus pages hold the words of Judas, words that have now been preserved, transcribed, and translated for the whole world to take a look at.

The National Geographic magazine that also comes out in Bulgaria, and the TV channel by the same name have both announced upcoming specials on the matter. The magazine's May issue will provide more information to the public. A movie that is to be aired April 9 will take viewers into the world of Judas and his own understandings of an act that humanity has always considered the ultimate betrayal.