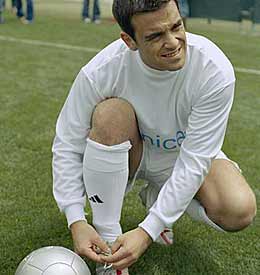 All the funds accumulated from the series of games that will take place over the summer will go to UNICEF. Football legends and celebrities from all over the world will clash in the tournament called "England Against the World".

Williams already has gathered experience enough to lead his team to victory, for he played in another charity game in 2005. "I have been a goodwill ambassador with UNICEF since 2000," Williams said. "These football matches gave me the opportunity to spent some of the happiest moments in my life."

The musician added that during his trips with UNICEF he had seen a lot of happy smiles form children and that he would like to return the gesture by playing in the Soccer Aid.

The big game will take place at the legendary Old Trafford stadium in London, where thousands are expected to support the good cause and their favorite stars in a new role.