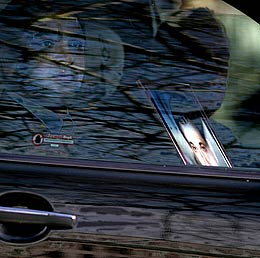 Scores of private guards looked out for allowing only relatives and close friends to pay their last respects to late Ivan Todorov, who was brutally killed in Sofia a week ago. Photo by Yuliana Nikolova (Sofia News Agency)
Ivan Todorov, dubbed Doktora, was buried Wednesday amid extremely tight measures of security.

Scores of private guards looked out for allowing only relatives and close friends to pay their last respect to late Todorov, who was brutally killed in Sofia a week ago.

Fifteen bullets have been pulled out of the head and body of Ivan Todorov.

The condition of Vassil Stoyanov, 37, a driver of Todorov, who was heavily wounded in the latest Sofia shootout, remains very serious.

Doktora was shot dead in downtown Sofia on February 22. The police also found about EUR 10,000 cash and six mobile phones while searching his Porsche Cayenne.

Ivan Todorov became a household name in Bulgaria after a failed attempt on his life in April 2003.

Todorov, 42, was the target of numerous police investigations, including goods smuggling and money laundry. His name appeared to be investigated as a mastermind of a large international network of cigarettes trafficking.

Alleged underworld bosses Krassimir and Nikolay Marinov, who were in jail at the time of the murder, have been questioned over the gang-like murder.

Despite pompous declarations by police and governmental officials that the fight against organised crime has taken on speed, the murder of Todorov stunned with its bold manner. It occurred amid police being all over the city last Wednesday due to the official visit of Turkish president.