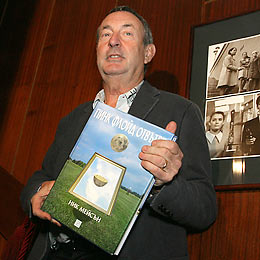 Nick Mason had flown in earlier the same day to personally present his book to the local audience.

"It's a pity that I only came here as a writer and not as a drummer," Mason has told the Bulgarian media.


He has revealed starting making notes for the book back in 1994.

"I've simply tried to capture the elements that I think give a picture of what I thought was happening at any one time, and to try to be honest about both the triumphs and the complete shambles that make up a band's existence," Mason has said about his writing.

The book marks the very first time that a group member has written a recollection of their experiences of life in the band.