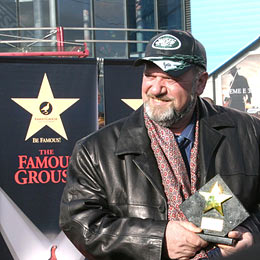 The burly clarinet player arrived for the red-carpet ceremony in front of the Arena movie theatre in white Lincoln car.

The Bulgarian, described as the greatest clarinet player on the Balkans, is also known as the King of Wedding Music.

After forming his first ensemble in 1974, he gradually evolved from a traditional Thracian repertoire into a jazz-inspired improvisational set. This new work nevertheless maintained the complex time-signatures required of traditional Bulgarian dance music.

Valya Balkanska, whose marvelous voice travels in outer space as a message from Earth, became the second Bulgarian to be glorified in the Walk of Fame after football coach Hristo Stoitchkov, who received his star on October 14.