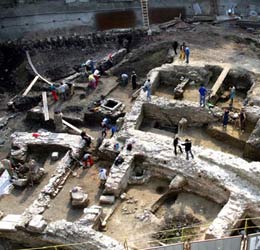 The ancient gladiator arena unearthed in the heart of Sofia is likely to take shelter in the Coliseum Hotel that is currently under construction on the site. Photo by Yuliana Nikolova (Sofia News Agency)
The ruins of the largest on the Balkans area amphitheatre emerged from beneath the ground in Sofia making Bulgaria's capital the third in Europe perched on such ancient building.

So far, only Madrid and Paris have had large amphitheatres within the city's boundaries.

An ancient amphitheater was unearthed in centre Sofia last year, while an excavator machine was digging up for the fundamentals of an eight-storey hotel in downtown city.

The building company Fairplay has immediately redrafted construction plans with view of including the unearthed parts in the hotel's interior, which is about a fourth of the whole ancient building spreading under the city centre.

The gladiator arena, with address at Sofia's Budapest Street, has so far revealed the "menians" - the seats for noble Roman patricians - while the poor plebeians' seats will probably remain undisclosed, as they are placed higher and excavations means would not provide for those.

Archaeologists have unearthed thousands of bronze and one gold coin with the image of Emperor Constantinos the Great.