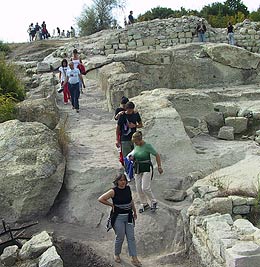 This is the first of the kind finding in Bulgaria, the team's chief Nikolay Ovcharov said. According to him, the pulpit was built at the end of the 4th century AD or the early 5th century during the reign of Byzantine Emperor Honorius and coincided with the period of the christening the Thracians in the Rhodopes area.

It has the form of one-ship basilica of 16.5 m length, which is the most typical form of an early christen religious temple.

The pulpit, which is almost untouched by time, is richly decorated with stone-carved ornaments. An eagle with largely spread wings is clearly seen on the rock.

It also bears five inscriptions in Greek, which are yet to be explained but which archaeologists suppose are liturgical writings.

One hypothesis suggests the church existed until 12 century when it was erased from earth's face by barbarian invaders. At about that time it was probably sealed up and abandoned to the oblivion of time.