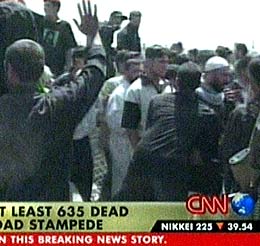 Hundreds of people occurred amid a stampede on a bridge over the Tigris River as over a million Shias marched to a holy shrine as part of an annual religious festival. Wednesday is the last day Iraqis register to vote in October's referendum. Photo by CNN
Poison has been found in at least fifty bodies, hurried into a Baghdad hospital after stampede on a bridge in the capital killed at least 635 Iraqi Shi'ites, CNN reported, citing sources from the Baghdad hospital.

The type of the poison was not immediately clear.

The crowd, on its way to Kadhimiya mosque in the north of the capital, panicked after it was said that a suicide bomber threatened to blew himself up. Some of the people jumped off a bridge they were crossing.

So far no group has claimed responsibility for the attack.