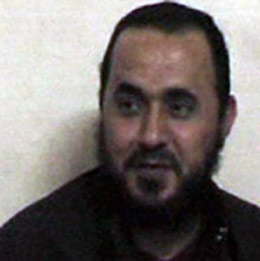 Militant leader Jordanian-born terrorist Abu Musab al-Zarqawi has claimed responsibility for some of the bloodiest attacks against U.S. troops and Iraq's forces. Photo by CNN
Iraq's most wanted militant, Jordanian Abu Musab al-Zarqawi, who as Al-Qaeda's pointman in Iraq has claimed responsibility for dozens of attacks, is overseeing preparations for a major attack in Europe, Time magazine said on Sunday.

"The fear is we'll see these disparate, relatively inexperienced groups around Europe hook up with Afghan-trained terror cells, all under the influence of Zarqawi," independent French terrorism expert Roland Jacquard told Time.

Last year, al-Zarqawi pledged his allegiance to bin Laden and later gained his praise over his work against coalition troops in Iraq.

The group of Al-Zarqawi has claimed responsibility for some of the bloodiest attacks against U.S. troops and Iraq's forces.