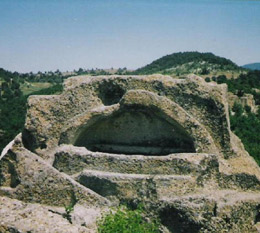 Professor Nikolay Ovcharov, who heads the expedition working at the tomb, sounded alarm that just a month after the end of the excavation works, the only Thracian overground temple might be completely destructed.

Ovcharov urged for emergency measures. He told the National Radio that Culture Minister Stefan Danailov has requested a report on the condition of the historical treasure.

The Orpheus' tomb needs some BGN 50,000 for its reconstruction.

At the end of July the team of Ovcharov said that they have discovered Orpheus' grave near the village of Tatul. Continuing excavation works come to confirm preliminary suggestions by archaeologists that the sanctuary at Tatul has flourished for more than two thousand years in ancient times. It is probably the largest temple after the sanctuary of Dionysius in Perperikon, also located in the Rhodopes Mountain.