WHO IS WHO: Sergey Stanishev 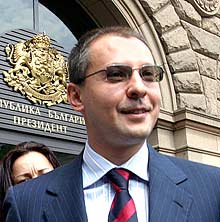 Born on May 5, 1966 in Herson, Ukraine. Son of the former secretary of the Central Committee of the Bulgarian Communist Party Mr. Dimitar Stanishev.

Single. Graduated in history from the Moscow State University with outstanding results, 1989. Ph.D., 1994.

Specialized in political sciences at the Moscow School for Political Studies, 1998.

Specialized in international relations at the London School of Economics and Political Sciences, 1999-2000. Worked as a freelance journalist, 1994-1995.

Manager of Procom Ltd. since 1997. Member of the Bulgarian Socialist Party (BSP). Chief expert at the Foreign policy and international activity department with the Supreme Council of the BSP, 1995-1996.

Head of the same department, 1996-2001. Elected member of the Supreme Council of the BSP, the Executive Bureau of BSP and Secretary in charge of international activities of the SC of BSP on the 44th Congress of BSP in May 2000.

Elected chair of the SC of BSP on December 15, 2001. MP from Rousse in the 39th National Assembly (Parliamentary Group of the Coalition for Bulgaria).