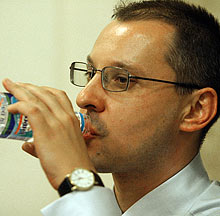 With the return of the exploratory mandate to the President, they practically cleared the way for the King's party and the right-wing to receive the mandate next.

Socialist leader Sergey Stanishev, 39, announced the decision around noon on Thursday, after last night's bid to earn support for the draft Cabinet triggered a Parliamentary crisis.

"We do not want to rule at all costs," said Stanishev, 39, who will remain at the helm of the Socialist party after his government's vote debacle.

He lashed his political opponents for being irresponsible about Bulgaria's national interests, adding that it would be impossible to form any government without the Socialists and the MRF represented in it.

The President confirmed his readiness to hand "as soon as tomorrow" the mandate to the June 25 elections runner up Simeon II National Movement.

Stanishev, 39, had an unprecedented Premiership that lasted for little more than five hours. In a controversy-marked extraordinary session that continued until the small hours of Thursday, lawmakers turned down the Socialist draft after approving Sergey Stanishev for Prime Minister (120/119)/

"Yesterday in Parliament we witnessed unprecedented pressure on lawmakers," Stanishev said in his statement Thursday.

On Tuesday the Cabinet vote was blocked after all opposition MPs staged a walkout of parliament in an unprecedented voting debacle.