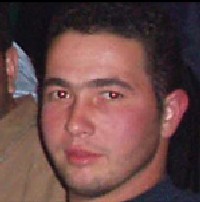 Brazilian electrician Jean Charles de Menezes, 27, shot dead in London, may have run from police because of his visa situation. Police killed the man during the hunt for the subway bombers. Photo by news.bbc.co.uk
The Brazilian man shot dead by police who mistook him for a suicide bomber in south London had been in Britain on an out-of-date visa, officials say.

Jean Charles de Menezes, 27, may have run from police because of his visa situation, BBC reported.

The electrician had come to the UK on a student visa, which allows people to work for a small number of hours.

Relatives of Menezes deny his visa had expired and are considering suing over the Stockwell Tube shooting.

Meanwhile, detectives are still hunting for the men who attempted to blow up three London Tube trains and a bus last Thursday.

Three men have been arrested so far, but it is thought the four would-be bombers are still free and may have access to more explosives.

There is also speculation about a fifth bomber, following the discovery of a backpack containing a device in a west London park on Saturday.