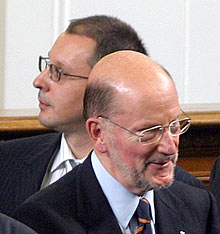 The parties of Sergey Stanishev (back) and Simeon Saxe-Coburg (front) remain firm on the nominations of their leaders for the Bulgarian prime minister’s chair. Photo by Yuliana Nikolova (SNA)
Outgoing Prime Minister of Bulgaria Simeon Saxe-Coburg should stay on the helm of Bulgarian government in the next cabinet. This was decided after four hours of discussions at the Political Council of Simeon II National Movement on Tuesday.

The Council considers the nomination of Simeon Saxe-Coburg as a guarantee for continuation of the policy aimed to realize national priorities, a statement of the party reads.

The SIINM has confirmed its support to the political agenda agreed with the other two leading parties over the weekend. The Socialists, SIINM and the Movement for Rights and Freedoms have drafted the common political priorities to lay the basis of a future coalition government.

Deputy party leader Plamen Panayotov announced that there is still no outright decision for entering into coalition with the Socialists and the predominantly Ethnic Turkish party of Ahmed Dogan.

Bulgaria has entered a third week of negotiations among political forces seeking to coin a formula to compose the next government of the country.

The Cabinet of Simeon Saxe-Coburg filed a resignation on Monday, as most of its members are MPs in the 40th parliament.