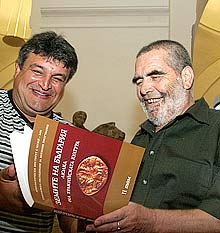 Prominent archaeologist Georgi Kitov (R), whose findings earned him the fame of “Bulgaria's Indiana Jones”, presented his latest book "The Land of Bulgaria. Cradle of Thracian Culture.” Photo by Yuliana Nikolova (Sofia News Agency)
Archeologists digging in the excavations of ancient Thracian tombs in Bulgaria will need some BGN 200,000 to carry out their work this year.

The TEMP expedition of Kitov will resume July 5 its work in the Valley of Thracian Kings. They will extend digging and research of the Goljamata Kosmatka excavations site, Kitov has said as quoted by Bulgarian News Agency.

It has revealed one of richest Thracian tombs known from the times of Antiquity.

Prominent archeologist Georgi Kitov, whose findings brought him the fame of Bulgaria's Indiana Jones, will present his latest book "The Land of Bulgaria. Cradle of Thracian Culture" on June 30 in Sofia.