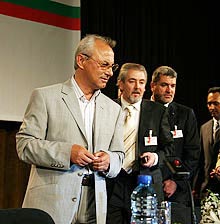 With about 60.17% of the election sections data processed, the Simeon II National Movement ranges second in the Bulgarians' political preferences. About 18.41% have backed up the ex-king's party.

Another 8.89% have supported the socialists' Coalition or Bulgaria, exit polls show. Democrats for Strong Bulgaria is backed by 5.59% of the voters abroad, while Union of Democratic Forces received 4.40%.

In the country MRF, which was Simeon's government junior coalition partner, ranks third with over 11% of the votes, according to the exit polls.

The formation is expected to gain from 27-28 MP seats in Parliament, up by 6-7 seats over the previous general assembly.
Politics » Be a reporter: Write and send your article
Advertisement
Advertisement
Expats.bg All Are Welcome! Join Now!
More from Politics