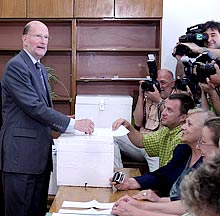 "We hope that a maximum number of people will go out and vote today", premier said after casting his vote. "This is the most important thing for the country and the democracy", Saxe-Coburg added.

The Premier expressed disappointment that the lottery idea faced such public disapproval, causing so many debates. "This lottery was important to urge people to vote", he said.

The cabinet introduced the innovative idea of election prize-draw as a voter turnout boost.

Voters who want to take part in the state lottery will have to apply via phone call or sms from 7 p.m. on June 25 until the last minute of June 26. Subscribers to the BTC telecom can call 0900 32 32; the GloBul mobile operator will open a line with the short number 32 32.

Another option is to apply via the official website of the elections, www.bgizbori.org.