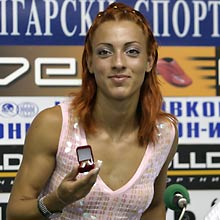 Lalova will undergo surgery early on Wednesday morning at a Greek clinic, and medics have projected that her full recovery wpuld take no less than six months.

The accident means that Lalova, who has been Bulgaria's most successful sprinter over the last few years, will be unable to participate the World Championship this summer.

Earlier this month, the 21-year-old sports star won the 100m finals in the International Golden Spike in the Czech Republic.

Lalova is also a European Champion at 200m and a double Olympic finalist last year.