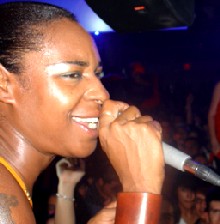 The DJ and vocalist will perform in Sofia on June 20 together with the young talents from the Academy. She will also meet the Bulgarian celebrity aspirants to share her experience in the music industry.

Five years ago, Sonique's debut album and the hit single It Feels So Good, topped the world's music charts, and became and immediate hit in Bulgaria.

The famous performer is now working on her third solo album.