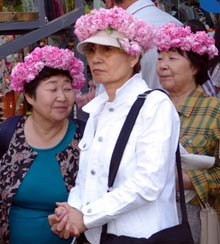 Thousands of people from all over the world decorated themselves with oil-bearing roses at the Rose Festival in Kazanlak, to mark the beginning of the rose-harvesting period. Photo by BTA
Over 50,000 people participated on Sunday in the procession, which closed the rose festivities in the town of Kazanlak - the cradle of the famous Bulgarian rose oil.

Among the guests, attending the traditional festival, were 15 envoys to the country, including chief of EC Delegation to Sofia Dimitris Kurkulas, and ambassadors of the United States, Japan, South Korea, and others.

The Bulgarian rose production is popularised every year during the Festival of Roses. The festival originates from the celebrations held at the beginning of the rose-harvesting period.

The three main events mark the celebrations - electing of Queen Rose, harvesting ritual in the rose gardens and the parade along the streets of the town.

The Valley of Roses is one of the biggest producers of rose oil in the world.

According to a legend, returning soldiers of Alexander Macedon's garrisons brought the first roses to Thrace from the region of the town Kashan in Persia through Syria and Damascus.

Bulgarian scientists presume that the cultivation of the roses was introduced to the region round Kazanlak, a town founded by the Turks in 1420.

The roses were reportedly brought from Tunisia by a Turkish judge, who had beautiful vast gardens planted with fragrant roses.