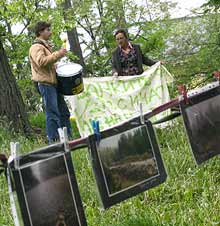 In front of Sofia-based office of EBRD, environmental activists staged a protest against a ski zone project in the area of Bansko, Pirin Mountain, financed by the bank. They wanted finances cut off to stop the project. Photo by Y. Nikolova (SNA)
Residents from Bulgaria's Pirin area, to the south, gathered in front of the resident office of the European Bank for Reconstruction and Development (EBRD) in Sofia to protest against a bank-sponsored project.

The EBRD, having 20% equity in Bulgaria's First Investment Bank, finances a major project for the construction of a ski zone in the area of Bansko.

According to protestors coming mainly from various ecological organisations, the project comes into breach with Bulgarian and international law, as well as with the EBRD's Environmental Procedures.

They fear the major investment and urbanization of the mountainous area will affect the natural balance, pollution and shortage of water, erosion and obliteration of virgin woods to result in the loss of local biodiversity.