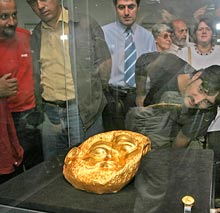 The owner of the ancient gold mask – Thracian king Seutus III – has been chopped after his death, Bulgarian experts found, proving a theory for Thracians' funeral rituals. Photo by Kameliya Atanasova (Sofia News Agency)
The Thracian king Seutus III, whose gold mask was unearthed in 2004 by Bulgarian archaeologists, has been chopped with an axe after his death, an expert research showed.

According to archaeologists this discovery is pure sensation because it proves the theory that ancient Thracians used to chop into pieces their rulers' bodies and buried them in different places.

The discovery was made after an examination of the king's bones, which were found in a tomb near the Shipka Peak, southern Bulgaria in 2004.

Only his legs and lower jaw were found together with the 680 g gold mask.

In the summer of 2004 a group of Bulgarian archaeologists came upon an astounding founding of a whole Thracian treasure, including a gold ring, ornate silver, bronze and ceramic pieces. The gold mask, which was also found there, proved to be 2,500-year-old.

The whole collection will be displayed for the first time on Wednesday in the Archaeological Museum in Sofia.

Bulgaria's President Georgi Parvanov and the Prime Minister Simeon Saxe-Coburg will attend the opening of the new exposition marking the 100th anniversary of the museum.