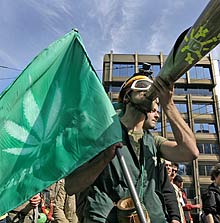 A young Bulgarian mimics smoking a large marijuana cigarette during Saturday’s Global Marijuana March. The event is carried out simultaneously in more than 130 cities worldwide to demand cannabis-smoking freedom. Photo by Yuliana Nikolova (SNA)
A crowd of young Bulgarians joined Saturday the Global Marijuana March, a worldwide protest against bans on smoking cannabis.

The Bulgarians marched through downtown Sofia in the afternoon, surprising passersby with curious costumes, balloons and placards.

Their chants echoed down the Vassil Levski, Patriarch Evtimii, and Vitosha Boulevsrds, as well as Alabin St. and Gurko St..

The Global Marijuana March, formerly known as the Million Marijuana March, was held for the first time in 1999 in New York City. Initiator Dana Beal then managed to expand the rally to more than 130 cities internationally.