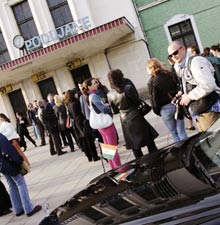 Sofia citizens, culture and media representatives, as well as foreign ambassadors came to Podujane rail station late Tuesday to find out that the previously advertised opening of a new modern art museum was fake. Photo by Y. Nikolova (SNA)
A group of Bulgarian artists caused a major public scandal by organising a fake opening of a Modern Art Museum in Sofia.

Over 100 Sofia citizens, culture and media representatives flocked late Tuesday to the railway station of Podujane, expecting to see a grand opening of a new museum with the special presence of the Bulgaria-born artist Christo Yavasheff.

As it later turned out it was a well-planned action for drawing the public attention to the urgent need of such a museum in Bulgaria.

The project was organised by a circle around the Bulgarian artist Ivan Mudov - an emblematic figure in the contemporary Bulgarian art.