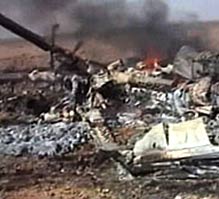 The civilian helicopter was downed about 20km north of Baghdad, killing all 11 people on board.

Sofia identified the three Bulgarian victims as Lyubomir Kostov, Georgi Naydenov and Stoyan Anchev. They were employed by Bulgarian airline Heli Air, which worked on a wet leasing contract with Toronto-based SkyLink Aviation. The Canadian company was contracted by the US Defense Department to transport personnel involved in the reconstruction of Iraq.

The attack on the Russian-built cargo aircraft is believed to be the first downing of a civilian aircraft in Iraq.

Thursday's incident increased the number of Bulgarian casualties there to 14 - eight military and six civilian deaths.

The twin-engined Mi-8 helicopter, which has both commercial and military uses, has been in operation for more than 30 years and can carry up to 24 passengers.

Later the same day, Iraqi guerilla group The Islamic Army in Iraq has claimed responsibility for downing the helicopter in a short posting on a web site.

The authenticity of the brief statement could not be verified immediately.

READ MORE in Politics, World, For the Record sections