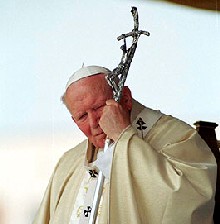 Catholic News Agency comments that only miracles occurring after his death would count toward his sainthood.

An eventual speedy canonization of the pope would waive the current procedure under which the process for beatification begin only five years after a person's death.

Pope John Paul II himself started the process for canonization of Blessed Mother Teresa of Calcutta only a year and a half after her death.