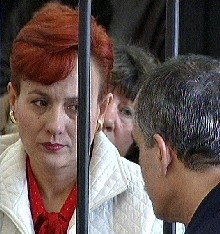 The Bulgarian nurses on death row claim Libyans tortured them into making confessions, the only evidence proving their guilt in the HIV trial. Photo by bTV
Libyan medics and security officials, linked to the leader Colonel Muammar Qaddafi, have deliberately caused the AIDS outbreak at a Benghazi children's hospital, according to an anonymous letter, posted at a Libyan oppositionary Internet site.

The authors of the letter, thirteen Libyan doctors, declare they are ready to provide evidence absolving the Bulgarian medics on the death row on condition of international protection for them and their families.

"We are following closely the problem with the HIV-infected Libyan children, which is blamed on the Bulgarian medics. The problem however is different from what Libyan media says," the statement reads as cited by Bulgarian 24 Hours daily.

It clearly states that people from the entourage of Colonel Muammar Qaddafi have committed the awful crime, which can be proved by "irrefutable evidence".

According to the letter the Bulgarian nurses are indirectly responsible for the AIDS outbreak as "some of them were involved, while others kept their silence about the interference of outsiders".

The anonymous letter gives no further details about the guilt of the Bulgarian medics.

In May 2004 Libya found five Bulgarian nurses and a Palestinian doctor guilty of having caused the death of 40 children and of infecting more than 400 others with HIV at a Benghazi hospital.

The six were sentenced to death by a firing squad, sparking cries of foul from Bulgaria and its allies the US and the EU and hampering Libya's efforts to recover ties with the West after decades of isolation.

The medics' confessions, which were extracted with torture, is the only evidence proving their guilt.

Bulgaria has ruled out paying any indemnities to Libya, saying that would equal acknowledging its medical workers' guilt.

There are fears that the already protracted trial may drag on for another three years.

The medics have been in detention for five years already.