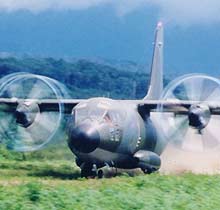 Bulgaria is to contract the purchase of eight C-27J Spartan Tactical Transport Aircrafts by end of April. The primary roles of the C-27J are cargo transport, troop transport and material and paratroop airdrop. Photo by www.airforce-technology.com
Bulgaria has chosen the Italian Alenia Aeronautica company for the purchase of eight Tactical Transport Aircrafts, Defense Minister Nikolay Svinarov confirmed Wednesday.

The purchase is to be contracted by the end of April, Svinarov also said.

The C-27J Spartan has the same logistical and maintenance characteristics of the Lockheed Martin C-130J Hercules Medium Tactical Airlifter, and also shares commonality of the cargo capacity.

The purchase comes shortly after the country ordered 18 helicopters from a French company, Eurocopter, in February. The Balkan country worked out a purchasing program after it became a NATO member in April 2004, in a bid to modernize its armed forces with more advanced US and European equipment.