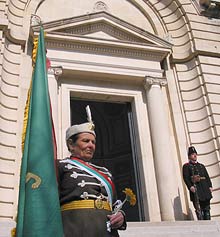 The monument mausoleum of Bulgarian Prince Alexander I Batenberg has opened doors in Sofia, renovated for the 148th anniversary of the prince's birth. Photo by Kameliya Atanasova (SNA)
Sofia Mayor Stefan Sofianski hosted Tuesday a service commemorating Prince Alexander I Batenberg, the first ruler of Bulgaria after its liberation from Ottoman yoke (1879-1886). A 148-anniversary since his birth was marked on April 5, 2005, in the renovated monument mausoleum of Prince Batenberg in Sofia. Alexander I realized the significance of the historic challenge to restore the country's unity after it had been fragmented at the Berlin Congress in the summer of 1878. He is credited by Bulgarian people for the unification of the Principality of Bulgaria and Eastern Rumelia in the autumn of 1885 and for its successful defending through diplomatic negotiations with the Great Powers and by the victory of his young army in the war with Serbia.