Madrid Skyscraper at Risk of Collapse 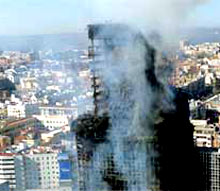 Columns of black smoke rise from the Windsor Building as the fire destroyed its top floors. Photo by www.elpais.es
Firefighters, who battled a blaze in a landmark Madrid skyscraper, warned the entire structure is now at risk of collapsing.

Sections of a the 32-office high office building collapsed on Sunday morning after a fire raged through the upper floors.

The fire, described as the worst in Madrid's history, is believed to have been caused by short circuit.

"The fire is not under control," Madrid Mayor Alberto Ruiz Gallardon told reporters early on Sunday. "We are all aware that we are fighting the biggest fire that the city of Madrid has had in its entire history," he said.

"The fire department is making an extraordinary effort to stop the fire spreading to surrounding buildings," he said.
Politics » Be a reporter: Write and send your article
Advertisement
Advertisement
Expats.bg All Are Welcome! Join Now!
More from Politics