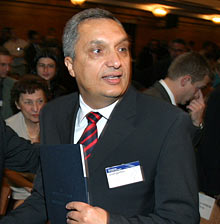 The New Timers will be deceived and will not get the ministerial posts for which they traded their support for the government, Kostov said during his visit to the town of Pleven, Northern Bulgaria.

In his words the political center, as described by political scientists and sociologists, has been conquered by Ahmed Dogan, leader of the junior coalition partner, the predominantly ethnic Turkish Movement for Rights and Freedoms.

According to him Ahmed Dogan used the New Timers as a tool in a scheme, which envisaged to keep control over tobacco monopoly Bulgartabac and hold prime minister Simeon Saxe-Coburg on a string.

The deal struck to rescue the government traded conscience for power and money, Kostov said.

It survived 128-106, two MPs abstained.
Politics » Be a reporter: Write and send your article
Advertisement
Advertisement
Expats.bg All Are Welcome! Join Now!
More from Politics