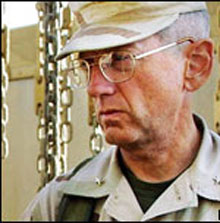 "Actually, it's quite a lot of fun to fight; you know, it's a hell of a hoot. I like brawling; it's fun to shoot some people", he was caught as saying on tape, cited by the BBC.

Talking about Afghanistan, he said men who slapped around women for not wearing a veil had no manhood and it was fun to shoot them.

The commandant of the Marine Corps, Gen Mike Hagee, later issued a statement saying he had counselled Gen Mattis on his remarks.

Gen Mattis is a brave and brilliant military leader and it seems there will be no disciplinary action, the statement said.